By dimasmis 7:02 PM Post a Comment
How to Perform Forehand Service, backhand service and also return service in badminton correctly? In general, service techniques in badminton are carried out by directing the shuttlecock to the right, left, front or back of the opposing player. The thing that must be avoided when doing service is the position of the shuttlecock which is responsible and right in front of the opponent.
This is tantamount to suicide because then the opponent will be able to easily restore service and at the same time kill our movements. In providing service to badminton sports, there are 3 types of techniques, namely as follows:

How to Perform Forehand Service Technique

How to Perform Backhand Service Technique

The type of backhand service technique is slightly different from the two previous techniques. This backhand service technique is performed using moderate force and moderate swing (not too slow and not too strong). When doing service with the backhand technique, the foot position must be adjusted to which hand is holding the racket. If it is the right hand holding the racket then the right foot is in front and the left is behind.

How to Service Returns in Badminton?

Not only the procedures for performing service, service return techniques also need to be mastered in badminton. This service return movement can be done in various ways, namely dropshot and netting. The most avoided movement when returning service is the smash movement. This is because the shuttlecock movement in this service movement is not too strong / sharp, so if we do a smash the resulting smash is not sharp. And as a result, opposing players can easily return our smash, even in some cases it is the opposing player who will benefit from this because a weak smash will be rewarded with a very sharp smash. Until finally turning off our own game movements. 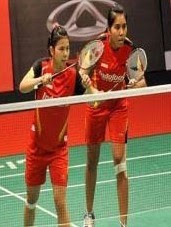 How about badminton lovers. That's a little knowledge about forehand service techniques, backhand service and how to return the correct service in badminton.