By dimasmis 6:30 AM Post a Comment
The ginger benefits are not only as plants that can warm the body. Ginger is a plant that originated from Southeast Asia. This ginger plant then spread to various countries. Famous for its distinctive aroma, ginger is used as a cooking ingredient as well as alternative medicine in China, India, and the Middle East. When choosing ginger, especially if you want to use it for treatment, you can choose ginger that is still fresh, sturdy, smooth, and not moldy. What are the benefits of ginger that you can get for health?

The usefulness and ginger benefits

Fresh ginger has a stronger taste compared to powdered ginger, the content of gingerol which is good for health is also still widely available in the benefits of fresh ginger. To take advantage of fresh ginger, you can mix ginger with dishes such as processed seafood dishes, salad toppings, and your smoothies or juice mixture. 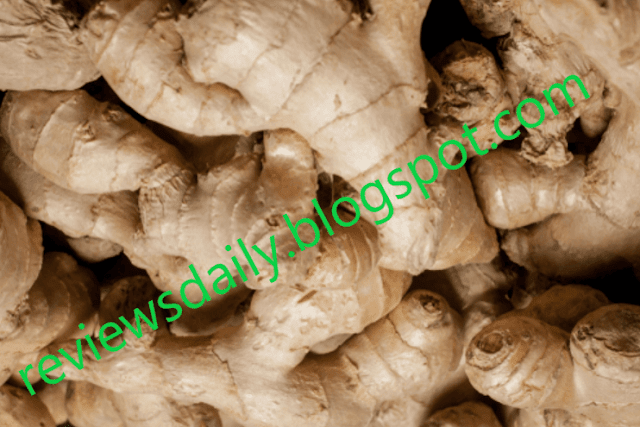 However, if you choose ginger in powder form, make sure you choose pure ginger powder. Ginger powder drinks sold on the market usually already contain added sugar. Store ginger powder in a tightly closed container and store it in a dry, dark place, and not stuffy or hot.
The ginger benefits for health

The benefits of ginger have a long history of dealing with digestive-related problems. Known from generation to generation, ginger is one alternative ingredient to facilitate the digestive system. The content of phenolic in ginger serves to relieve symptoms of gastrointestinal irritation, stimulate saliva, prevent contractions in the stomach, to help the movement of food and drinks while in digestion. Ginger is also called carminative, a substance that can help remove excess gas in your digestive system. Digestive problems such as colic and dyspepsia can be overcome with ginger.

The benefits of ginger can relieve nausea caused by morning sickness, vertigo, and the side effects of cancer treatment. You can eat ginger raw or make it a drink, ginger in the form of candy can also work well, especially in dealing with nausea suffered by pregnant women.

A study conducted at the University of Georgia states that daily consumption of ginger supplements can reduce muscle aches caused by exercise by up to 25%. The benefits of ginger can also reduce pain due to dysmenorrhea, pain during menstruation. In one study, it was mentioned that 60% of women feel the pain caused by menstruation decreases after consuming ginger.

Ginger is a type of food called diaphoretic, the benefits of ginger can also trigger perspiration. Sweating is beneficial for you especially when you have a fever or flu. In addition to helping the detoxification process, sweating also can protect you from microorganisms that can cause infections in the skin. The experts examined a type of protein called dermicidin, produced in the sweat glands and functions to protect the body from bacteria such as E. coli, staphylococcus aureus, and fungi that can cause skin diseases.

Protect you from cancer

One of the ingredients in the benefits of ginger that plays a role in preventing cancer is gingerol, a phytonutrient in ginger which also gives a unique flavor to ginger. Gingerol can prevent the growth of colon cancer cells. The University of Minnesota conducted experiments on a group of mice, in the group given gingerol there were 4 mice with colon tumors, while in the group not given gingerol there were 13 mice that had tumor growth. Until the 49th day of the study, all the mice that were not given gingerol were finally injected to death because the tumor growth was too large, while in mice given gingerol the tumor was half the size of the mice that were injected dead.

Gingerol is also anti-inflammatory. This explains why those suffering from joint diseases such as osteoarthritis and rheumatism report reduced pain after consuming ginger regularly. Eating ginger not only reduces pain but also reduces swelling on the affected part. Ginger is thought to inhibit components that play a role in inflammatory processes in the body such as cytokines, chemokines, chondrocytes, and leukocytes.

The ginger benefits for weight loss

In a study conducted by researchers from the Institute for Human Nutrition at Columbia University found that consuming hot ginger for a diet can make you feel full longer. As a result, you also tend not to eat more later.

Not only that, this study also found that ginger can help suppress your appetite. This happens because ginger can increase the body's metabolic rate and calories burned.

Other studies have also found something similar about ginger

While a new study, published in the Annals of the New York Academy of Sciences, examined more than 60 previous research findings conducted on cell culture, animal experiments, and humans. Overall research states that ginger and various compounds contained therein have beneficial effects on obesity, diabetes, and heart disease.

Not only that, ginger has also been shown to be able to inhibit oxidative stress (a form of cellular aging), has anti-inflammatory properties, reduces cholesterol levels and blood pressure. In fact, ginger can reduce atherosclerosis, which is a buildup of harmful fats in arteries.

In that study, it was explained how ginger spices play a role in fat burning, carbohydrate digestion, and insulin production. When fed to mice, ginger has been shown to significantly reduce body weight and systemic inflammation, reduce cholesterol and blood sugar and protect the liver from the harmful effects of non-alcoholic fatty liver disease.

Even so, until now researchers still do not understand about the formulation and the proper dosage in order to get the clinical benefits of ginger for weight loss.

Is that red ginger? Red Ginger is a family of ginger, but has different characteristics from other ginger. Red Ginger or Zingiber officinale var. rubrum has a reddish-colored skin with an internal part that is pink to yellow, different from ordinary ginger. The size of red ginger is also smaller than normal ginger. Not only that, the content and taste are also different. This type of ginger has a bitter and spicy taste than normal ginger. 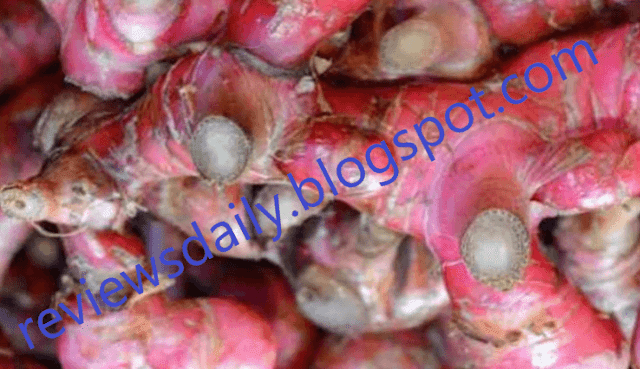 Red ginger is found growing in Southeast Asia, including Indonesia. Many people use ginger as a traditional medicine to cure various diseases. The content of ginger is very much, such as gingerol, flavonoids, antibacterial agents, anti-inflammatory agents, and others, can have a positive impact on health.

What are the benefits of red ginger for health?

The many active ingredients in red ginger make red ginger can provide health benefits for you. Some of the benefits of red ginger are:

Red ginger oil extract can protect your digestive system from bacteria, thus preventing you from digestive problems, such as stomach aches. Antibacterial agents that exist in ginger can fight bad bacteria, such as Escherichia coli, Salmonella enteriditis, and Staphylococcusaureus.

When added to food, ginger can be used as a natural preservative and can prevent you from food poisoning due to bacteria. Not only that, the warmth provided by ginger can also calm your digestion.

The warmth given by ginger is also widely used to treat colds and colds.

The various ingredients in ginger can act as an anti-inflammatory so that it can help you fight acute and chronic inflammation. Active components in ginger, such as gingerol, gingerdione, and zingeron can inhibit the enzymes cyclooxygenase and lipoxygenase. So that it can reduce leukotrienes and prostaglandins as triggers of inflammation. Red Ginger also contains oleoresin which is higher than other ginger, where oleoresin can also work as an anti-inflammatory.

Several studies have been conducted to prove the effect of ginger on inflammation. A study conducted on sepak takraw athletes proved that giving ginger extract for 10 days can reduce muscle pain in sepak takraw athletes. Other research published by the American College of Rheumatology also proves that ginger extract can help reduce symptoms of osteoarthritis, such as muscle aches.

Ginger contains antioxidants and has androgenic activity. Thus, in several studies it was found that ginger can increase the amount of the hormone testosterone so that it can increase male fertility.

In a study conducted on mice showed that the administration of ginger extract combined with zinc minerals in male albino rats can increase testosterone hormone, sperm count, and sperm quality in mice. So, this can improve testicular function in mice. Even so, further research is still needed to strengthen this finding.

Add ginger to your diet

For those of you who are on a diet and crave sweet foods, you certainly have to rack your brain to reduce the desire to eat sugar. Don't worry, you can replace the sugar in food with ginger.

By using ginger, your dish will have a strong aroma, slightly sweet taste, and somewhat spicy. Use ginger in food by pounding, grated or baked before mixing it into cooking. Are you interested in adding ginger to healthy food for your diet? Here are various ways you can try at home.

Chew the ginger slices a few minutes before eating. If you don't like to chew raw ginger, as an alternative you can mix a little grated ginger with lemon juice and salt. Then, eat a pinch of the mixture before eating. In addition to improving the digestive system, eating a small pinch of ginger mixture before meals can also reduce your appetite so that it does not make you eat too much.

Drink two to three times a day ginger juice that has been mixed with honey to taste.

Add your food with this one as often as possible.

The benefits of ginger to increase metabolism can indeed help you lose weight, including fat in your body. However, exercising regularly and paying attention to healthy food intake is the best way to burn fat to lose weight.

How to make ginger drink for health?

To get the optimal benefits of ginger, you should choose fresh ginger. Common ways to make ginger water at home are as follows:

If the taste is too strong, you can add the lemon juice. Because the lemon is widely used as one of the natural ingredients for weight loss because it is believed to help increase the body's metabolic work.

The faster your metabolism works, the faster and more fat is burned.

In addition, lemons have natural diuretic properties that can help clean the intestines of the leftover pile of constipation-causing foods. Logically, the more hardened food scraps accumulate in the intestines, the more weight you gain.

Another theory is that lemons are a food source that is so low in calories that it won't trigger weight gain, because the acidic properties of it actually help reduce hunger.

Similarly, ginger. An article in the British Journal of Nutrition reports that ginger can control blood sugar and cholesterol levels, and burn fat, thus helping to reduce appetite. Dr. Len Kravitz in the Biological and Pharmaceutical Bulletin article states that ginger can suppress the production of the hormone cortisol.

Be careful of the side effects of drinking ginger water

Drinking ginger water to get the benefits of ginger is generally safe. But when consumed in excess, ginger can make stomach aches, flatulence feel hot, to the heartburn and diarrhea. You are not recommended to consume more than 4 grams of ginger per day.

Consumption of ginger in any form is also feared to cause dangerous interactions if you are taking blood-thinning medication. So if you are one of them, consult with your doctor before drinking ginger water.