Definition, Causes and Prevention of Osteoporosis 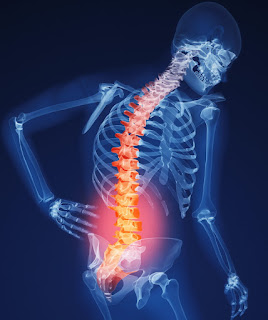 Osteoporosis is accompanied by an increased incidence of fractures (especially broken bones) in the spina (vertebrae), wrists and cervical vertebrae. For example the occurrence of compression of a spinal fracture that causes kyphosis (hunches) accompanied by back pain, this symptom of 20% occurs in women aged over 60 years.

According to Santosa Giriwijoyo (2007) the number of women sufferers is 4x more than men. This is caused by:
Men in menopause occur at a later age, characterized by reduced fertility due to reduced production of endrogen hormone (testosterone), which causes osteoporosis.

Diet Needs of Ca2 + (lime) for the prevention of osteoporosis between 1000 - 1500 mg / day. Which is good for consumption such as skim milk, yogurt with low fat content. In the case of milk allergy should be replaced by consuming Ca2 + tablets.

Osteoporosis can only be inhibited, can not be cured, because of that prevention is very important and even must be started from the age before puberty.

Intake enough Ca2 + especially at puberty and prevent foods that can increase the decalcification process or that can inhibit Ca2 + absorption so that bone mass can reach its maximum at the end of puberty.

Doing a lifetime of exercise, especially in women, because bone mass is positively correlated with the strength of the muscles in the cast in question. Another benefit of exercise is to improve the ability to move (mobility) and the ability to coordinate so that people are better able to maintain balance and not easily fall. Fall is the most important cause for fractures (broken bones) in osteoporosis. The type of exercise should be weight-bearing, that is, exercise by using weights for large muscle groups. Frequency per week is 3x, with duration (length of time)> 30 minutes.

Hormone therapy should be started early in menopause, especially in women, to prevent rapid bone loss. Menopause is much feared by women because it will cause various complaints such as wrinkled skin, sagging breasts, vaginal dryness and decreased libido. Therefore, hormone therapy is also used to delay menopause. However, hormonal therapy needs to be aware of the possibility of malignancy (cancer), namely the occurrence of breast and uterine cancer in women and prostate cancer in men. Therefore hormonal therapy must be under a doctor's supervision
Facebook Twitter