The Correct Principles in Sports Exercise

dimasmis
Wednesday, September 11, 2019
Facebook Twitter
Exercise should be done properly and correctly and follow the principles in sports training. According to Thomson (1991) there are three main principles of exercise training, namely:

The human body is made up of millions of cells, each of which carries out the task according to its function, these cells have the ability to adjust to what is happening in the body, including adaptation to exercise. When someone's fitness is challenged with training weights there will be a response or body response, the initial response in the form of fatigue. When loading is stopped there is a recovery and adjustment process. This adjustment and recovery does not only lead to initial fitness, but to a higher level. Thus exercise with more weight will be compensated for by the body
achieve a higher fitness level or Over \ mm compensation, as shown in picture 1. 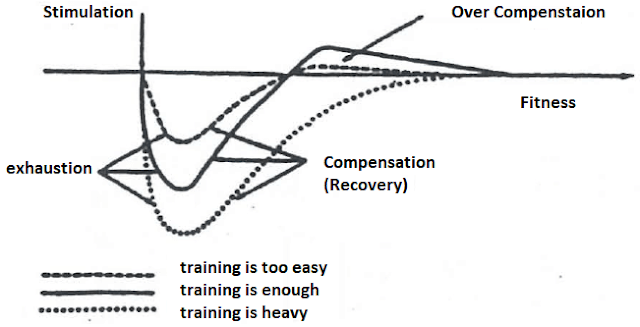 "If you don't use it you will lose it, meaning that the exercise adaptation will be lost if the exercise is not regular or stopped. To gain fitness requires a gradual increase in exercise loading, as described in Picture 2.
Picture 2. Gradual loading (Source: Thomson, 1991)

The principle of specificity states that, the special nature of the training load will produce special responses too. More weighting must be given specifically in accordance with the objectives to be achieved for example: training to increase endurance cardio respiration is different from training to increase muscle strength (adjusting to the demands of the energy system and the muscle groups involved).

Follow the exercise instructions in accordance with the rules and principles of good and correct sports so that goals in sports are achieved, especially for optimal body fitness.
Facebook Twitter