The Causes of Gingivitis

Gingivitis is caused by the long-term effects of plaque buildup. Plaque is an inherent material that forms around the teeth because bacteria, saliva and food scraps are the main causes of caries. Material from plaque that can be disposed of into hard deposits called calculus which is buried under the teeth. Plaque and calculus irritate and cause inflammation of the gums. Bacteria and toxins produced by bacteria cause infected, swollen and soft gums. 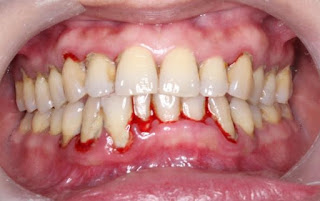 Injury or trauma to the gums in some cases, including errors in how to brush teeth can also cause gingivitis. Uncontrolled diabetes, pregnancy (due to hormonal changes that increase sensitivity to the gums), systemic disease and poor oral health, including the risk for developing gingivitis. Irregularity of teeth, rough patches and dirty tools in the mouth (orthodontic devices, artificial teeth) can irritate gums and increase the risk of gingivitis.

Many people experience gingivitis to different degrees. Gingivitis usually develops in line with puberty or adolescence, where there is a hormonal change, which causes the frequency of gingivitis to remain or increase depending on how healthy the teeth and gums are.

Symptoms and signs of Gingivitis

Treatment, prevention and cure of gingivitis

To treat gingivitis, care is taken. The goal of treatment is to suppress inflammation of the gingiva. Teeth cleaned entirely by a dentist.

This treatment is possible, using several instruments to release and remove deposits from the teeth (scaling).

Instructions on how to properly brush teeth must be given to the patient, and must be understandable. The dentist demonstrates how to, brush teeth and how to use dental floss. Check teeth recommended twice a year or more depending on the case. Antibacterial mouthwash or other medicines can be carefully administered in certain circumstances.

Improving the poor state of the teeth or using orthodontic devices can also be recommended. All diseases related to the condition of the teeth and mouth must be treated.

Removal of plaque and calculus from inflamed gums will feel uncomfortable. Bleeding and softening of the gums will decrease between 1 to 2 weeks after cleaning by the dentist. Warm salt water or antibacterial mouthwash can accelerate the healing process. Anti-inflammatory drugs can relieve discomfort after cleaning.

Healthy gums will look pink. Oral hygiene must be maintained for a lifetime or gingivitis can reappear.

Gingivitis that is not treated with good care can progress to periodontitis. and infection or abscess can occur from the gums or jawbone.

We can take preventive measures for gingivitis. Good oral hygiene is the best way to prevent gingivitis. Teeth should be brushed at least 2 times a day and use dental floss at least 1 time a day. For people who are prone to gingivitis, toothbrushes and flossing can be recommended after every meal and before bedtime.
Facebook Twitter