dimasmis
Thursday, September 15, 2016
Facebook Twitter
Virus on computer is a self-duplicating computer program that spreads from computer to others computer, interfering with data and also software. Just like biological viruses infect human, spreading from person to others person, also computer viruses infect the personal computers (PCs) and servers computers, the computers that control access to a network of computers.

Some viruses are mere annoyances, but others can do serious damage. Computer Viruses can delete or change files, load and run unwanted applications, , steal important information, send documents via electronic mail or e-mail, or even cripple a machine’s operating system (OS), the basic software that runs the computer.

Several types of antivirus software can be used to detect the presence of a computer virus. By using antivirus and Scanning antivirus software can recognize the characteristics of a virus’s computer code and look for these characteristics in the computer’s files. Because new viruses must be analyzed as they appear, Antivirus scanning software must be updated periodically to be effective to detect new kinds of computer virus. Other scanners search for common features of viral software or programs and are usually less reliable.

Antivirus software is usually sold as packages containing many different software programs that are independent of one another and perform different functions.

When installed or packaged together of antivirus scanner software, antiviral packages provide complete protection against computer viruses. Within most antiviral packages, several methods are used to detect computer viruses. Check summing, for example, uses mathematical calculations to compare the state of executable programs before and after they are run. If the checksum has not changed, then the system is uninfected. Check summing software can detect an computer infection only after it has occurred, however. As this technology is dated and some viruses can evade it, check summing is rarely used today. 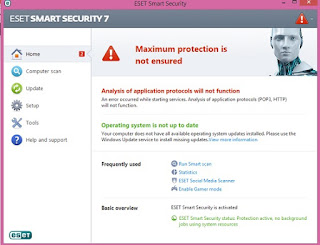 Most antivirus packages is also use heuristics (problem solving by trial and error) to detect new computer viruses. This technology observes a program’s behavior and evaluates how closely it resembles a virus. It relies on experience with previous viruses to predict the likelihood that a suspicious file is an as-yet unidentified or unclassified new virus.

And the Other types of antivirus software include monitoring software and integrity-shell software. Monitoring software is different from scanning software. It detects illegal or potentially damaging virus activities such as overwriting computer files or reformatting the computer’s hard drive. Integrity-shell software establishes layers through which any command to run a program must pass. Check summing is performed automatically within the integrity shell, and infected programs, if detected, are not allowed to run.

Once a virus infection has been detected, it can be contained by immediately isolating computers on networks, halting the exchange of files, and using only write protected disks. In order for a computer system to recover from a virus infection, the virus must first be eliminated. Some antivirus software attempts to remove detected viruses, but sometimes with unsatisfactory results. More reliable results are obtained by; restarting it from a write-protected floppy disk, turning off the infected computer, and erasing any viruses on the boot sector, deleting infected files and replacing them with legitimate files from backup disks.
Facebook Twitter