How To Underhand and Overhand Serve in Volleyball

By dimasmis 6:49 PM Post a Comment
Volleyball game is played by two teams, each team consisting of six players. The team was declared the winner is the team that first reaches the value of 25 points. In the play volleyball there are some basic techniques that must be mastered in order to be able to play properly.

How to perform Underhand Serve

The underhand serve can be practiced by means players stand behind the line of the back field. The ball is held with the left hand for player with right hand serve. As the ball at waist height and then hit into the opposite field passes over the net.

How to perform Overhand Serve

Overhand Serve can be practiced in the following way. 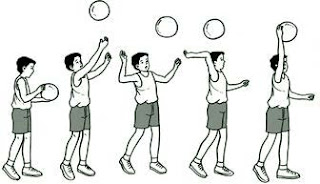 The basic serve technique both underhand and overhand serve is a basic technique which marks the beginning of the game and be an attack early in the game of volleyball. Stay enjoy with volleyball.