By dimasmis 10:56 PM Post a Comment
One day, the Prophet Muhammad was asked about the virtues and vices (sins). He said, "Virtue (al-birr) is noble character (husn al-huluq), while evil or sin (al-itsm) is what makes your heart restless, and you do not want anyone else to know." (Hadith narrated by Muslim from Ibn Sam's al-Ansari).

The nature of sin, says of expert hadith al-Munawi, is something that makes the soul was not calm and not peaceful heart. This is because according to the nature, people are more inclined to righteousness. Heart is like a light that is clean and bright. Therefore, when people do good, then there will be synergy and harmony (between two light), which in turn brings peace. By contrast, al-Munawi says, if people do evil (sin), then the heart light will be dimmed and does not happen synergy, and then causing anxiety. (Faydh al-Qadir: 3/8 2 5).

Generally, Sin is classified into two categories, namely the major sins (al-kaba'ir) and minor sins (alshagha'ir). The scholars, as quoted by al-Ghazali in Ihya '' Ulum al-Din, disputing about the big and small sins. There is an opinion, any act against the law of God is a great sin. There is also an opinion, the sin is seen major sin if threatened with hell fire, threatened with punishment, and called explicitly ban in the Qur’an.

If you shun the great sins which you are forbidden, We will do away with your small sins and cause you to enter an honorable place of entering.

And those who. shun the great sins and indecencies, and whenever they are angry they forgive.

Similarly, in the hadith. In one hadith, the major or big sins are called four, namely shirk, disobedience to the mother-father, killed, and perjury (public deception). In another narration, mentioned there are seven of major or big sin, four above, plus witchcraft, usury, feeding the orphan's property, desertion and adultery accusations to noble women (Bukhari and Muslim from Abu Hurairah).

Beyond all that, there are three sins are regarded as the source, causes and the base of major sins and crime. 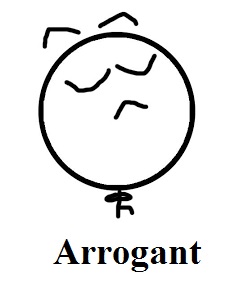 And when We said to the angels: Make obeisance to Adam they did obeisance, but Iblis (did it not). He refused and he was proud, and he was one of the unbelievers.

Second, greedy and greedy sin, the sin that once made by Prophet Adam and his wife, Eve (Surah al-Baqarah [2]: 36).

But the Shaitan made them both fall from it, and caused them to depart from that (state) in which they were; and We said: Get forth, some of you being the enemies of others, and there is for you in the earth an abode and a provision for a time.

Third, the sin of envy and jealousy, sin had once done by Cain. Because of jealousy, Cain heart to slay his own brother. (Surat al-Ma'ida [5]: 27).

And relate to them the story of the two sons of Adam with truth when they both offered an offering, but it was accepted from one of them and was not accepted from the other. He said: I I will most certainly slay you. (The other) said: Allah only accepts from those who guard (against evil).

The third sin, because it is a large and potentially encourage the birth of other sins, and unheard and is done by humans during the earliest (adam prophet), it is no exaggeration to third sin is called " Sins Causes major Sin and Evil” Allaah knows best.