The Leader of Cautious People

dimasmis
Monday, September 7, 2015
Facebook Twitter
Become a leader means have to bear a very heavy burden and in the future certainly will be accountable in front of God in the hereafter. Nevertheless, it turns out millions of people today still dreaming and struggling to seat and position as a leader. In fact, lead yourself and your family is not only difficult to play, especially if you have to lead hundreds of millions of people of many different races and classes education classes, attitudes, and habits.

The Prophet said, "The leader of a people is the servant of these people." (Reported by Abu Nu'aim). Unfortunately, today many leaders who are themselves otherwise. They even manipulate people he led for the sake of their self, family, party, and his own faction. Very rare figure of the ideal leader that surface and behave like a servant of his people, as a reflection of the above hadith.

Indeed, become a leaders is not as good as imagined by hunters power. In the Quran, God tells the people of high standing. And, in one prayer, they asked to be appointed to be a leader for the people who fear Allah. 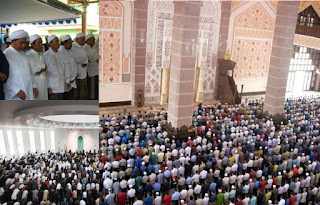 Why they are only asking God to be a leader for the righteous or cautious People? Turned out to be the leader for the ungodly and favors kufr not at all pleasant. If the leaders do good to them, they do not grateful, even on the contrary, reproach. However, if the leaders make a small mistakes, they will be busy blaspheme, curse, insult, and if possible kill.

Strictly speaking, become the leader of the ungodly, only get more heartache than gain pleasure. So why millions of people are still thirsty the seat of power? No other reason is because the magnitude of the surge of lust in their chests.

In the days of the first four caliphs, Abu Bakr, Umar, Uthman and Ali radi anhum, nearly 100 percent of the people in those days consisted of people who are cautious. In fact, Allah praised them as the people who blessed him. The words of Allah in the Qur’an:

And (as for) the foremost, the first of the Muhajirs and the Ansars, and those who followed them in goodness, Allah is well pleased with them and they are well pleased with Him, and He has prepared for them gardens beneath which rivers flOw, to abide in them for ever; that is the mighty achievement. (Surah at-Tawbah [9]: 100).

The Caliph Abu Bakr and Umar in particular feel the pleasure of becoming the leader on those who fear, righteous, cautious.

While Uthman and Ali began experiencing turmoil with the advent of the ungodly although still in minority. In fact, although the man of sin at that time only a handful in number, it turns out the four noble leader who was actually killed by men of sin.

What about our beloved country? Are more godly people than those who were ungodly? If we are honest judge, certainly answers obtained have been equally understandable. So if you already understand the answer, we still dream to hunt seat of power?
Facebook Twitter