-->
Home/ Children's Health/Vitamin A for Baby and Caution When Eating

Vitamin A for Baby and Caution When Eating

dimasmis
Wednesday, June 24, 2015
Facebook Twitter
Children need vitamin A to help resist illness, protect their eyesight and reduce the risk of death. Vitamin A is found in many types of fruits and vegetables, red palm oil, eggs, foods made from milk, liver, fish, meat, and a variety of fortified foods and breast milk. High doses of vitamin A can be given every six months to children aged six months to five years.

Up to the age of six months, breast milk is the main source of vitamin A if the mother has enough vitamin A from food or supplements.

Children aged six months to five years can get vitamin A from many foods such as liver, eggs, fish, red palm oil, mango and papaya, oranges, potatoes, vegetables, green leaves and carrots.

Children who are deficient in vitamin A are less able to fight off a variety of potential fatal disease and the risk of night blindness. Children who have trouble seeing at dusk and at night the possibility of having a deficiency of vitamin A. The child should be taken to be treated by delivering high doses of vitamin A supplements by skilled health personnel.

In some countries, vitamin A has been added to cooking oil, sugar, wheat and flour, milk and livestock products as well as other foods. In some countries where vitamin A deficiency has been widespread, and children often die of diarrhea and measles, vitamin A in the form of high-dose capsules distributed twice a year to children aged six months to five years. 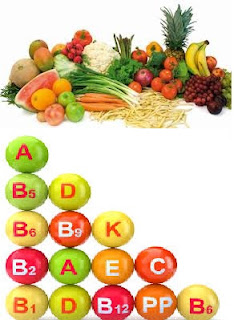 Diarrhea and measles can deplete vitamin A from the child's body. Children who suffer from diarrhea or measles, or suffering from malnutrition should be treated with high-dose vitamin A supplements can be obtained from a trained health worker.

Children who suffer from measles should receive vitamin A on the day of the examination, and then one dose the next day and another dose at least two weeks later. Zinc tablets may also be given for 10-14 days to (1) reduce the level of severity and duration of diarrhea or (2) to protect children against diarrhea for up to two months of subsequent diarrhea attacks. The dose for children aged six months, is 20 milligrams in a day, for children under six months is 10 milligrams per day.

Mealtime is a time to learn, love, love and interact to increase the growth and development of the physical, social, and emotional child. Both parents, or caregivers need to talk with the child during the meal, and feed and treat boys and girls equally and patiently.

Mealtimes provide the opportunity for mothers and fathers or caregivers to interact and talk with children and helping their learning process. It can help stimulate social and emotional development of children. Persuading children to want to eat is important, but should not force them to eat.

Each child is different in the ability to receive breast milk, as well as its growth rate. Babies need to be fed directly while children over one year should be helped, when they begin to learn to feed themselves.

If the child does not want to eat certain foods, the caregiver can try different combinations of foods, flavors, and how to persuade is also different. Caregivers should seek the smallest possible not distract, if a child loses appetite

Boys and girls demanding attention and ate the same time. They should receive the quantity and quality of food and the same drink. They both had to get the milk in the first six months of age, and received varying amounts of food in the same amount after six months old. Mom and dad need to get information about child nutrition. Both parents should take a role in feeding their children.
Facebook Twitter