-->
Home/ Children's Health/Things Must be Known about Immunization in Children

Things Must be Known about Immunization in Children

dimasmis
Thursday, June 25, 2015
Facebook Twitter
Immunization is important. Every child should get a complete package that is required immunizations. Scratch protection through immunization for children aged less than one year is very important. All parents or other caregivers should follow the advice of a trained health worker on when to complete the immunization schedule.

Children should be immunized as soon as possible. Get all kinds of required immunizations on time is very important for children, both male and female.

Some vaccines require multiple doses to provide maximum protection. Because it becomes very important for every child to get the full immunization package.

Immunization types listed in the table below it is important to protect infants aged less than one year. This immunization will provide results that are very effective if given at the right age.

Infant immunization schedule that is required: 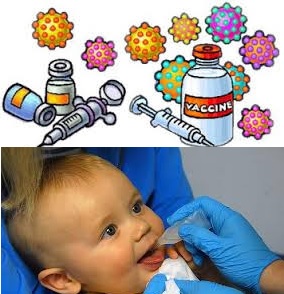 Parents and caregivers should follow the immunization schedule required. If the child does not get the package complete immunization before the age of one year, then it is very important for the child to complete shortly.

In some countries, additional vaccine doses, called a booster given after age one year. Giving a booster to help maintain the effectiveness of the vaccine so that children can be protected for longer. Booster Vaccines include : Measles, DT, TT

Immunization protects against several dangerous diseases. A child who is not immunized, tend to be easily exposed to diseases that can cause disability or death.

Immunization is a way to induce / enhance a person's immunity is active against a disease, so that when later he was exposed to the disease will not get sick or only a mild illness.

Immunization protects children against some Preventable Diseases Immunization (PD3I). All children, including children with disabilities, should be immunized. A child is immunized by vaccines that are injected or dripped through the mouth.

In some countries, hepatitis is still a problem. 10 out of 100 people will suffer from hepatitis throughout his life if not given a hepatitis B vaccine Up to a quarter of the number of children who suffer from hepatitis B can develop into a serious liver disease conditions, such as liver cancer later in life. In addition, it shall be given Hepatitis B immunization as soon after birth to prevent transmission of hepatitis virus from mother to child.

BCG can protect children from tuberculosis. DPT can prevent diphtheria, pertussis and tetanus. Diphtheria cause upper respiratory tract infections, which in some cases can cause breathing difficulties and even death. Tetanus causes muscle rigidity and painful muscle spasms and can lead to death. Pertussis or whooping cough affects the respiratory tract and may cause coughing up to eight weeks.

All children need to be immunized against polio. The signs of polio are suddenly paralyzed limbs and difficult to move. Of the 200 children infected with polio, then the people will become disabled all her life.

All children shall be immunized against measles, because measles can worsen the condition of malnourished children, poor mental development, and weakening eyesight and hearing. Signs of a child suffering from measles are a fever and red rash on the face, accompanied by cough, fluid from the nose and red eyes. Children can die from measles.

In many countries, pneumonia caused by pneumococcus bacteria or bacteria Haemophilus influenzae type B (Hib) is considered normal but can actually cause death. In addition, these bacteria can also cause meningitis and other serious infectious diseases. Different types of bacteria are very dangerous for children aged under five years. To prevent death, then the child should be given the vaccine Haemophilus influenzae type B, and pneumococcal vaccine.

The vaccine pentavalent (five-in-one), which combined with DPT, hepatitis B and Hib are now increasingly being used in several countries around the world.

Breast milk or condensed milk and colostrum yellowish produced for several days after a birth mother, give the baby protection against diarrhea, pneumonia, and other diseases. Colostrum is often also referred to as "the first vaccine for newborns" are useful for building a child's immunity to disease. All pregnant women and children should receive TT immunization.

Immunization to the woman of fertile age at least two doses of TT before or during pregnancy, will provide protection to mothers and their babies up to the age of a few weeks after birth.

At the age of two months, the baby needs the first dose of TT (tetanus component of the DPT vaccine) to extend the protection received from the mother against tetanus.

In some countries where a lot of vitamin A deficiency is common, the provision of high-dose vitamin A capsules are held every 4-6 months to every child aged six months to five years. Vitamin A shared with routine immunization activities (such as measles vaccine at nine months) or during special campaigns. Vitamin A is also an important part of measles treatment.

Immunization is safe to light a sick child, disabled or malnourished.

Many parents who do not bring their children to be immunized because the reason the child is suffering from a fever, cough, runny nose, diarrhea or other illness. Actually, immunization can be given to children with mild illness.

Immunization can also be given to children with disabilities or malnourished. If a child is exposed to new HIV-positive or suspected HIV positive, a trained health worker can advise what immunizations can be given.

Once children get a shot, usually a child crying or has fever, minor scratches on the skin or small wounds. This is a common thing that shows that the vaccine was working. For children under six months of age, must often be breastfed, while for older children should be given plenty of fluids and food.

If the child has a fever (over 38 degrees Celsius), then immediately taken to the health worker or health center.

Measles is very dangerous for children who suffer from malnutrition, so they should be immunized against measles, especially if the condition is more severe under-nourishment.

Syringes should be new immunizations

Every child should be immunized using a new syringe. Society has the right to make sure that in every immunization use new syringes.

Sharing needles and syringes are the same, although in between family members, can spread the diseases that threaten their lives. New syringes should always be used for each person. All immunizations in a variety of situations, including emergencies, should be administered using a syringe that is used only for one time only. Parents and caregivers should ask for a new syringe for each immunization. Health workers should discard syringes and other waste safely tool.

Disease can spread quickly when people gather together. All children living in congested environments, especially in the area of ​​displacement, or natural disaster conditions should be immediately immunized, especially against measles and tetanus Toxoid (TT).

Emergencies that encourages people to be rollicking leave his home often becomes the cause of the spread of various diseases. Therefore children under the age of 15 years, should be immediately immunized, especially against measles. Measles will be more dangerous for children who are malnourished or living in areas that the environment is not healthy.

Various diseases such as measles spread rapidly. A child with measles needs to be kept away from other children, and then immediately consult a trained health worker and receive high-dose vitamin A

Immunization record such as a book health card or maternal and child health must be brought to be filled by a health worker whenever immunized.

Following immunization schedule that is required is essential. Children should be immunized at the recommended age and should receive a dose according to age. By the time a child is immunized, health workers should record the vaccine, for example, to how many doses (first, second, etc.), the date immunizations, or the date of the health card given to the parents or guardians.

The vaccine should also be recorded and stored on the recording at a health clinic. It is important for parents or caregivers to store immunization card and bring it to the next immunization visit. Thus health workers may note, what vaccines ever received by a child, following the grant date of the vaccine. Health workers can also provide information to parents or guardians of a vaccine that has been given and still must be completed, and the next visit.
Facebook Twitter