dimasmis
Saturday, June 27, 2015
Facebook Twitter
What is ORS? ORS is a special combination of salt mixed with water. Its function is to help replace fluids lost through diarrhea.

When to ORS use?

How to prepare ORS to drink?


How much ORS given? 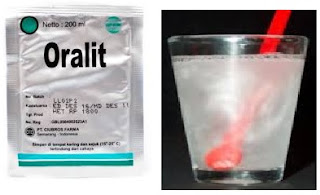 In the case of mild-moderate diarrhea-weight, can be used the following references:

For patients with mild dehydration can still drink:


For patients with severe dehydration which can no longer drink. For children aged less than 12 months:


After four hours for a large child or a baby six hours to do the revaluation. When it has recovered rehydration, intravenous fluids followed 100 ml / kg / 18 hours, or for the big kid in 20 hours.

What to do if no ORS?

Give the child a drink made from six teaspoons of sugar and half a teaspoon of salt dissolved in a glass of water.

Be careful mixing in the right dosage. Too much salt can be harmful to children.