By dimasmis 3:31 PM Post a Comment
Children need foods rich in iron to protect the child's physical and mental abilities and to prevent anemia. Source of iron is best derived from animals, such as liver, lean meat, and fish. Other sources of iron are foods fortified with iron and iron supplements.

Lack of iron in the diet everyday is a cause of anemia. Children may also suffer from anemia due to malaria and hookworm. Even a lack of iron in moderation alone can impair intellectual development of children. Anemia is a nutritional problem is most prevalent in the world.

Iron can be obtained from foods of animal origin such as liver, meat and fish. He also found in foods that come from plants, such as beans. Foods like wheat flour and corn flour, soy sauce, fish sauce and other soy sauce sometimes fortified with iron. Foods fortified with iron can help prevent anemia. If taken with vitamin C, the digestive system will absorb iron better.

Some of the symptoms of anemia include pallor on the palm of the hand, tongue, lips and inside the eyelids, in addition to fatigue and difficulty breathing.

In children aged under 2 years: 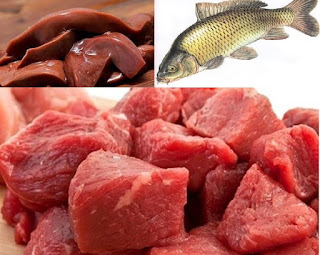 Anemia can be a cause of problems for balance and coordination, which can lead to the child seems quiet and withdrawn. This can limit the child's ability to interact and inhibit the development of the intellectual. Children can benefit from the provision of minerals and vitamins that contain iron in the form of nutritional supplements and blushes. Sow nutrition can be easily added to the practical into the diet of children ages ranging from six months of age.

In pregnant women and adolescent girls:

Anemia can increase the level of severity due to blood shortages and the risk of infection during childbirth. This is an important cause of maternal death. Children born to mothers who suffer from anemia often experiencing low birth weight and anemia. Iron supplements for pregnant women could protect a mother and her baby. Girls who also suffer from anemia, would benefit by eating iron tablet every week. This extra is needed to build iron stores in the body so that a healthy pregnancy.


Issues related to the worm: