dimasmis
Wednesday, June 24, 2015
Facebook Twitter
In addition to breast milk, baby at aged 6-8 months needs to be given additional food such as creamed foods as much as two to three times a day, and from the age of nine months as many as three to four times a day. They need to be given one or two times a snack, such as fruit, bread or pastry, depending on the tastes of children. At first, the baby was given eat, in small amounts at first, and gradually increased in accordance with the type and number of baby growth.

Good nutrition for children under two years of age is very important. Not enough nutrition in children of this age can slow physical and mental development of children throughout his life.

In order to grow and stay healthy, children need a variety of nutritious foods such as meat, fish, beans, eggs, fruits and vegetables in addition to breast milk.

A child's stomach is smaller than an adult stomach, so that a child can not eat in large numbers each time eating. However, power requirements and growth of children is very big. Therefore a child needs frequent meals, to meet all needs. 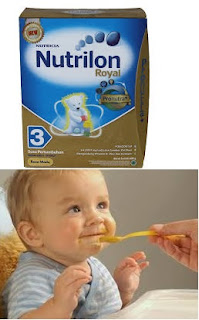 We recommend that children be fed into a plate or bowl child himself, so that parents or caregivers will be easier to know, what foods and how much the child has eaten.

The child may need to be coaxed to eat, and they may need help to organize food and crockery. Children with slow development or disabilities need special assistance to eat and drink.

Here below some information about how often the child should be fed:

Children must often get breast milk, and getting other foods two to three times a day. Parents should introduce soft foods (such as porridge) and gradually increased viscosity of the food. Food of animal origin such as meat, eggs, and fish, can be given as early as possible but should be softened in small pieces. Start with 2-3 spoonfuls every meal, later increased to 1/2 cup size of 250 cc.

Children aged 9-12 months should receive half mushy food bowl size of 250 cc each meal (three times the food mushy plus twice snack plus breast milk). Children aged 12 to 24 months requires one full-size bowl 250 cc family food at each meal (three times the family meals plus a snack plus twice breast milk). Children aged two years and above require at least one full cup at each meal. If the children can spend their food and still want more, then it should be given.

If the quality or quantity of food at each meal is low, or the child is no longer breastfed, then give 1-2 cups of milk plus extra food every day.
Facebook Twitter