dimasmis
Friday, May 22, 2015
Facebook Twitter
Thinking does not require time, space or special conditions. Someone can thinking while walking on the highway, when going to the office, driving a car, working at a computer, attending a meeting with colleagues, watching Television or while eating lunch. However, in the context of the teaching of Islam is in positive thinking

For example of positive thinking: at the time when driving the car, someone sees hundreds of people were outside. When watching them, he encouraged to thinking about various things. In his mind reflected the physical appearance of the hundreds of people that entirely different from each other. None of them were similar to the others. It's amazing: although these people have members of the same body, for example equally have eyes, eyebrows, eyelashes, hands, arms, feet, mouth and nose; but they look very different from each other. When thinking of little depth, he will be reminded that:

Allah has created billion of humans for thousands of years, all of them different from one another. This is clear evidence about the mighty and powerful of God.

Another Example of positive thinking

Wathcing of Human who was passing and rushing toward their each destinations, can bring a variety of thoughts in the mind of a person. When it first looked, appeared in his mind: the human of numerous is composed by individuals that distinctive and unique. Each individual has the world, a desire, a plan, a way of life, the things that make her happy or sad, and his own feelings. 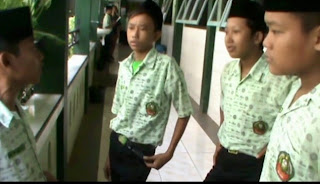 In general, every human being is born, grow up and mature, get an education, find a job, work, marry, have children, educate and marry off their children, grow old, become a grandmother or grandfather and eventually died. Seen from this standpoint, it turns the life of all human beings are not much different; does not really matter whether he lives in a neighborhood in the city of Istanbul or in large cities such as Mexico, there is no difference at all. Everyone will definitely die one day, a hundred years from now may be none of these people would still be alive.

Realizing this fact, someone would thinking and ask himself: "If we all will die one day, then what the hell is causing humans to behave as if they would never leave this world? Someone who would die already duly taken very charitable to life after death; but why nearly all humans behave as if they live in the world will never end? "

People who have positive thinking of things such as like this, it is the one who called people who thinking and achieve a very meaningful conclusions from what they thinks.

Most people does not thinking about the problem of death and what happens after that. When suddenly asked, "What are you thinking right now?", It will be seen that they were thinking about everything that does not need to think about, so it would not be more beneficial for them. However, someone could also "thinking" things "meaningful", "full of wisdom" and "important" at any time since waking up to go back to bed, and take lessons or conclusions from what he was thinking.

In the Qur'an, Allah states that those who believe think and reflect deeply on all the existing events and take useful lessons from what they thinking.

The above verse states that due to those who believe are those who thinking, then they are able to see the amazing things of God's creation and glorify the greatness, Science and Wisdom of God Allah. So be positive thinking anytime and anywhere.
Facebook Twitter