Simple Life, Teachings from the Prophet

dimasmis
Saturday, April 25, 2015
Facebook Twitter
How the simple life teachings from the Prophet Muhammad? Indeed, the simple life can be applied for anyone, not just those who are in the middle and lower economic status, but the simple life can also be implemented in the lives of anyone or people with highh class of economy. In the life of the Prophet. teaches for every Moslem to love poor people who seemed to live in humble life. They are very poor people and need help to increase their degree, and for continues their life.

About simple life of prophet, it is written in the Qur’an and also hadith of the Prophet Muhammad explains that, Prophet is also known to be very fond of and close to the poor people. When the Prophet have sustenance in the form of food, and then prophet collect the poor people to share what food he gets.

The Word of God Almighty. In one letter:

Meaning: Do you (people) know who people reject religion. They are people who are scold the orphan and not encourages to pay attention to the poor people. 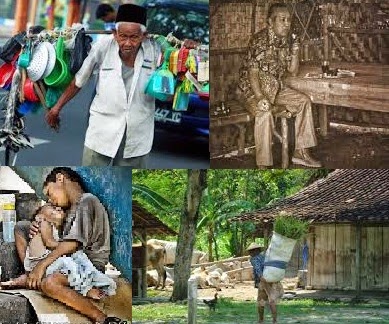 One of declaring claim that the Prophet really like and love the simple life in daily life with a lot of dealings with the poor people. Among of them is the Prophet improve self-esteem of the poor people in various ways, such as sewing the clothes belonging belonging to an old joke, fix the orphan slippers. Also when the Prophet in the mosque, the Prophet always chose those poor people to sit and chat and laugh with them sometimes.

From the above explanation, it is clear that the Messenger of Allah. prefer to life like poor people's lives is a simple life. Prophet Muhammad life very modestly, because he knows and understands that many companions of the Prophet were still living in misery. He even hold his hunger for days, knowing that some companions of the Prophet, who is unable to eat for days. Subhanallah how excellent of the personal and moral from prophet.

In a hadith narrated, after returning from a long journey, the Holy Prophet. dine with friends Aus bin Khaulah with honey and milk. But the Prophet did not accept it and say, 'I do not say if this is an illegal. However, I do not want to come on the Day of Judgment Allah ask me about excess living in this world. (Reported by Ahmad bin Hanbal).

We know that many of our brothers who are life in distress and poverty. As recommended by the Prophet and also in his life that prefer life in simplicity and paid little attention and love to the poor who live modestly. Let us follow the example of the simple life of Prophet Muhammad and can take wisdom of the example from the Prophet's in our lives so it appears in a simple and unpretentious life.

To start the simple life attitude can we begin to get used for saving, not show and arrogant and living in luxury. There are no benefit of arrogance, pride to know that the place of arrogant is thrown into the Hell. Another example of simple life can be shown with the attitude come to feel and love of the poor people and weak with charity for those who in distress and need. Share is beautiful and not to be deprived.
Facebook Twitter