Breastfeeding Baby Based on Qur'an and Health

Prompts Breastfeeding babies in the Qur'an

Allah said in the Qur'an:

And the mothers should suckle their children for two whole years for him who desires to make complete the time of suckling; and their maintenance and their clothing must be-- borne by the father according to usage; no soul shall have imposed upon it a duty but to the extent of its capacity; neither shall a mother be made to suffer harm on account of her child, nor a father on account of his child, and a similar duty (devolves) on the (father´s) heir, but if both desire weaning by mutual consent and counsel, there is no blame on them, and if you wish to engage a wet-nurse for your children, there is no blame on you so long as you pay what you promised for according to usage; and be careful of (your duty to) Allah and know that Allah sees what you do. (Al-Baqarah: 233). 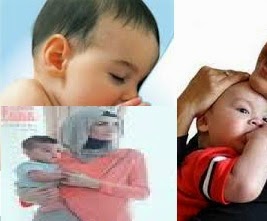 From the word of Allah above, it is clear that mothers are obligated to breastfeeding her child or her baby. So, the babies is entitled to get the milk (breast milk) from the mother. And breastfeeding the baby or child should be perfected over two years. While the father's obligation is to provide for his family members including his wife and son.

In the islamic history, a story that can be a model for Muslim mothers. Is a mother named Halimatus Sa'diyah, she is the mother's milk of the Prophet Muhammad. (Mothers who breastfeeding Apostle) is so great struggle and sacrifice in educating and caring for the Prophet Muhammad. when he was a baby.

The story started in a crisis and a drought that hit most of the Arabian Peninsula region. It makes the economic downturn in the region. Including those in crisis are a family of Bani Bakr, and the various attempts have been made, including one of them is to look for the baby and service breastfeeding.

After Halimah accept willingly, many miracles that happened which are, worries  about little water milk and not enough milk to breastfeeding the Prophet., it turns out the milk is very much. And even the water milk of halimah is enough to breastfeed their own baby in addition to breastfeeding Prophet. Any biological children who previously could not sleep well be able to sleep soundly because of fulfilled of breast milk.

In another word in Qur’an, Allah said:

Lodge them where you lodge according to your means, and do not injure them in order that you may straiten them; and if they are pregnant, spend on them until they lay down their burden; then if they suckle for you, give them their recompense and enjoin one another among you to do good; and if you disagree, another (woman) shall suckle for him. (at-Talaq: 6)

From the description of above verse, tells us that if the cause is due to certain reasons which cause a mother can not breastfeeding the baby or child, then a husband has an obligation to look for other people and hired him to breastfeeding a child or baby.

From the exemplary story of a mother and also a description of the Qur'an, it is explained to us about suggestions for a mother to breastfeeding a child or baby. In addition, breastfeeding for baby is also very important for the growth and development of baby or children as well as the close relationship between the child with the mother.

Breastfeeding baby or children and Health

There some of various kinds of studies show that in breast milk contains a variety of nutrients such as vitamins, minerals, iron, protein, antibody substances of which are already in balanced level. Breast milk is easy for babies to digest in baby's digestive system that is not perfect and very rarely and even do not cause interference or health problems in the digestive system. Breastfeeding baby or children will also be able to provide psychological benefits to the baby so it can bring close relationship between mother and her baby or child.

In addition, other benefits of breastfeeding in baby is to increase the intelligence of children. Health research results show that at the baby that have breast-fed at 18 months of age have Intelegent quotient or IQ (a number that indicates the level of intelligence of the person) 4.3 points higher, at the age of 3 years have 4-6 points higher IQ at the age of 8.5 years had an IQ 8.3 points higher when compared with children or baby who are not exclusively breastfed.

Based on the facts above, from the source of Qur'an, the story of the Prophet Muhammad. and also from the results of health research then breastfeeding baby is highly recommended, is an obligation for the baby's mother and the rights to exclusive breastfeeding and should be perfected up to two years. This is because breast milk is very important for the growth and development of children as well as psychological effects for both (mother and child). Islam is so perfect and one of the teaching is to give the best to our children, love them, maintain and care for them so that they grow into healthy generation and superior.