The keyboard is usually used is a QWERTY type keyboard, the shape is similar to the keys on a typewriter. The QWERTY keyboard has four parts: typewriter key, The numeric keys, The function key, The special function key. There are many types of Keyboard, that is Qwerty, Dvorak, Klockenberg


Mouse is one unit of input device. The function of this tool is to transfer a pointer or cursor quickly. In addition, it can be a practical command and faster than with a keyboard. Mouse began to be used to the maximum since the operating system has been based GUI (Graphical User Interface). Electrical signals as a mouse input device is generated by a small ball in the mouse, according to the shifting or movement. Most of the mouse consists of three buttons, generally only two buttons used are the left and right buttons.

Currently the mouse is also equipped with rollers button (scroll), which is located in the middle lies the key. The term of suppression or pressing of the left button is called by Click where the pressing is going to function when the mouse is on a designated object, but if not at the designated object of this emphasis will be ignored. There are also other terms referred to drag is pressing the left mouse button without releasing while being moved. This Drag will cause the object to be moved or copied to another object and other possibilities. Keystrokes left mouse twice quickly and regularly called as double click, while pressing the right mouse button one time called the right-click. Mouse consists of several port is a serial mouse, the mouse PS / 2, USB and wireless.


The input device can usually be found on laptops and notebooks, that is using fingertips. Usually this device can be used as a mouse replacement. In addition to the touchpad is similar models of input device is pointing stick and a trackball.


Light pen is electronic pointer that used for modification and design drawings with a screen. Light pen has a sensor that can transmit light signals to a computer which then recorded, where the monitor works with recording six electronic signal each lines per second. 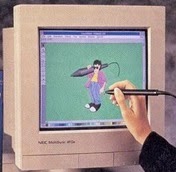 
This computer input device is usually used in the games of computer. Joy Stick is usually in the form of a stick, while the paddle games are usually square or rectangular, created form plastic is equipped with buttons that will govern the motion of an object in a computer. 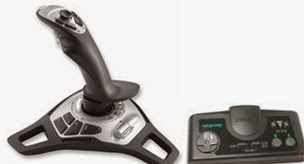 
Barcode included in the computer input unit device. The function of this tool is to read a code that squares or vertical thick lines which are then translated in the form of codes like as number or numerical. These codes is usually attached to food products, beverages, electronic devices, books and more. Today, in every country use this method in every cashier in a supermarket or supermarkets to identify the products it sells by using the barcode.


Scanner is a tool that can be used for copying an images or text that is then stored into the computer memory. From the memory of the computer, then stored in a hard disk or others storage media. The scanner function much like photocopiers, the difference is the result of copiers can be seen and displayed on a monitor in advance on the paper while the scanner results so that we can make improvements or modifications and can then be stored back in the form of text files or image files.


In addition there is also an image scanner to scan commonly used to detect computer answer sheet. Scanners are used to scan a computer answer sheet is commonly used IR SCAN to Computer Answer Sheet on general tests and the National Exam. This Scanner type consists of a light sensor called Optical, which can identify the type 2B pencil. Scanners on the market is a scanner to copy a picture or photo and usually also equipped with OCR (Optical Character Recognition) to copy objects and convert it to text form.

Until now, has been developed scanner technology with DMR (Digital Mark Reader), with a working system similar to the scanner to the computer answer sheet correction, biographical data and forms such as forms for school choice. With DMR answer sheets should not be answered uses pencil 2B, but can use other tool stationery such as pens and markers, and can use plain paper.


Development of technology has advanced so that the computer is able to receive input from the others input device such as camera. The camera is called Digital Camera with better image quality and better compared to how to copy images using a scanner. The sharpness of the image from a digital camera is determined by the pixel. The ease and practicality of this tool is very helpful many activities and jobs. Digital cameras do not require the film as a regular camera.

Pictures taken with a digital camera are stored into the memory of the camera in a file, then it can be moved or transferred to a computer. There are various types of digital cameras on the market today, ranging from the type of camera to take static pictures up to the camera for recording live picture or moving images such as video.


This computer input device is used to record or insert a voice that will be stored in a computer memory or to listen to the sound.


Technology CAD or Computer Aided Design can be use to design of the building, home, car engines, and aircraft using the Graphics Pads. Graphics pads is computer input device for drawing objects on the monitor.


Graphics pads that are used have two types. First, using a needle (stylus) that is connected to the pad or pads using low voltage, which in the pads are have sensitive membrane surface (touch sensitive membrane surface). Low voltage that is sent is then translated into the coordinates X- Y. Second, using the touch-sensitive pads without use of the needles. The way it works is by putting images on paper pads, then write with a pencil.

Computer input devices are device that are used to input data and give commands to the computer to be used in further processing. Examples of tools that serve as input media including keyboard, mouse, microphone, joystick, etc.
Facebook Twitter