dimasmis
Thursday, January 15, 2015
Facebook Twitter
How does it help the poor right? Mutual aid, mutual helps between fellow mainly poor people who need it is the Islamic teachings as the word of God in the Quran Surat Al-Maidah verse 2:

Private Messenger Prophet Muhammad. is the most noble people, fond of personal help, help the poor or people who couldn't afford it. Here is a tale of personal stories of the apostle who was keen to help the poor and the ways the Apostle in helping the poor.

One day, the Islamic prophet Muhammad. was gathered with his companions, there was someone who came to the Prophet peace be upon him asks. Then the Prophet. the beggar asked: do you have something in your House? The beggar said: of course, I had the usual clothes for everyday wear and a Cup. Later, the Prophet said: take and submit it to me. 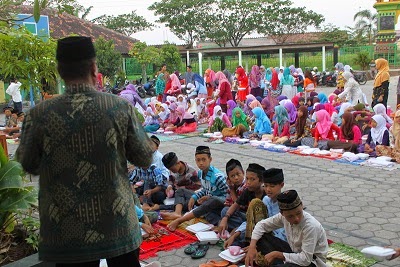 Then, the beggar was directly home and soon returned to the Messenger carrying the Cup as to what prompted the apostle. Then, the Messenger offers the Cup to his friend. The Apostles said: is there any of you who want to buy it?. Then one of his companions said: I bought one dirham. The Prophet offered him back to the other companions. There was one of the companions who can afford to buy the mug with the price of two dirhams. Later, the Prophet, gave two dirhams to the beggar. Messenger hoping to make money two dirhams were used to buy food for his family, and the rest of the money was used to give food after buying an axe.

The Prophet said to the beggar: look for wood that much and then sell, in two weeks time I don't want to see you!. After two weeks passed, the beggars are coming back to meet the Prophet., but his return to the Prophet, not to beg. He came to see the Messenger. by bringing a number of money-10 dirhams it generates from the wood he had sold. Later, The Prophet. told that beggar in order to buy food and clothing her family.

The Prophet said: things like this better for you, because the ask-ask for just making a stain on your face in the next future. Not worth it for a person helps except for three things, the poor who truly has no debt, something which is not capable of and could be paid off, and the disease that makes a person unable to and capable of trying.

If every person on this earth could imitate the behavior of the Prophet. as mentioned above. With the road gave alms or provide jobs, undoubtedly the number of street children, beggars, people are poor, and unemployment can be reduced.

So the Queen gives a minimal model the Messenger or example that spiritual piety, goodness has not been perfect, if it can be said not to follow and coupled with piety, social goodness.

The way of the Prophet Muhammad in helping the poor, not only in terms of money alone, but also in the form of "hook" in this case refers to a job with the hope that later on people who can't afford to live independently.

Postulate in the word of God in the Quran Al-Karim:

Meaning: Those who spend (benevolently) in ease as well as in straitness, and those who restrain (their) anger and pardon men; and Allah loves the doers of good (to others). Ali-Imran: 134

Indeed, poverty or poverty that can lead a person to the brink of disbelief.

If we can help it, share it with other people who are around us who are poor and needy, the poor in ways that are taught the Prophet. unemployment, poverty must be reduced, our posterity is assured of education and health, as well as many other benefits that will be gained from sharing with people who can't afford poor people.
Facebook Twitter