dimasmis
Wednesday, January 14, 2015
Facebook Twitter
Islam strongly encourage mutual help among fellow human beings. With mutual help will be able to grant waivers among one another. In addition, other benefits of mutual help can also cultivate the love of saying among fellow, able to create attitudes of mutual respect respect in the community of life among individuals. So that the integrity of the people will wake up with a strong.

Therefore, let every man be good first to help others before a person or any other person doing a favor to him. The Islamic prophet Muhammad. as in his words were narrated by Umar Ibn Jabir was very happy when his people giving aid, help, as well as a guarantee of economic deprivation experienced by others. As in the story of the following:

A story narrated ' Umar Ibn Jabir, one day, at noon Umar Ibn Jabir was resting, relaxing along with the Messenger of Allah., come one people with the weak state of the economy, shockingly poor in daily life where their work is as a hunter. The Prophet. so the House of sympathy to his face and changed his look of sadness.

At that time, because at the time of the very poor and expect help, then the Prophet went into the House, and then he came out and told the bar to say the adhaan in order to collect the people. After the Prophet Muhammad. working on the sunnah prayers, two rak'ahs, and then addressed with the intention that people give succor to the Messenger of Allah is that of the State of the economy improves. Shortly afterwards, a man giving help with gifts of food, clothing, and money ringgit. This was followed by several men from the anshor giving aid in the form of food and clothing to taste.

With the help of it, then the Prophet. said: Please give charity guys though magical pistachios. The words of the Prophet. This showed his back shining bright clean white as a sign of his excitement over the speech of people who get together to help each other.

And then the Prophet. said: whosoever shall contribute to the development of Islam in the form of a donation are good, then for him the reward on top of what he has to contribute and who reward meritorious with the donation does not reduce any reward them, and whoever contributed to Islam as an evil, then for their sins and the sins of the people who work with him once from them, without reducing the slightest Sin those who are already there. (Narrated By Muslim) 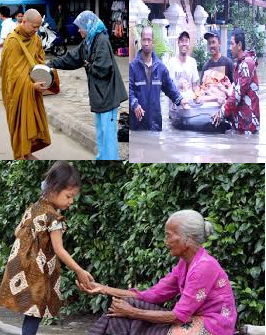 From the description above Hadith, gives to us as people of his Prophet. in order to continuously observe the aid to anyone in need, especially to help the poor who have difficulties in the economy by providing help and assistance whatever possessed good and can relieve the burden on their economic weaknesses. Subhanalllah ... ... ... ... ... ...

In return for you mutual help

Mutual help it is a worship, practices that are encouraged in Islam. Described in the Canon of Hadith the Prophet. that if someone helped by giving the help sincerely, then Allah will give the same return or reward in the afterlife.

As evidence the hadeeth of the Prophet Muhammad. : Muslims and fellow Muslims are brothers, should not despotic each other and give the load something incriminating and who fulfill his brother something, then God will perform the intent, and whosoever unleashed an Islamic people, God will let go of everything disaster distress in the hereafter, and whoever closes the evil or disgrace Islam people, then God will close her shame on the day of resurrection. '(Narrated By Al-Bukhaari).

From the description above, Hadith propositions can be drawn the conclusion that the very large reward or reward or recompense to be obtained for people who love to give succor to others by helping with sincere note just because the Almighty God. In return for a reward given is very big to be in the hereafter and the day of judgement. Subhanallah

It should be noted also in giving aid or help someone other than sincere attitude, needs to be coupled with the attitude of good deeds, tenderness or gentle, good natured, feelings of compassion. Will thus be able to cultivate an attitude not arrogant or pompous, and responsible. This is what is characteristic of the noble character, as described in the nature and the morals of Prophet Muhammad.

Theses words of the Prophet Muhammad. Behold the morals of the Messenger that is as contained in the Koran. (Narrated By Al-Bukhari, Muslim).

In the above Hadith, tells about the morals of Prophet Muhammad. that is a high-value morals Allah SW. and promised by God in the day of resurrection would be spared from any host and also the hurdles would later in the day of vengeance.

Thus such a noble Islamic teachings in terms mutual help among fellow human beings. With the help and give help with sincere to others because God Almighty. and accompanied by attitudes and morals noble will give a range of benefits as well as the wisdom and also get the rewards and the replies so great later later in the day of resurrection
Facebook Twitter