A Good Wedding Based on Islam

In this case, the Prophet Muhammad said: "the greatest women's that bring in blessing God for her husband is the most lightweight women's dowry. (Narrated By Ahmad, Hakim, Al-Bayhaqi).

Also in another Hadeeth, explained, that the Prophet Muhammad. said: Verily the most wedding blessings are simple wedding budget submission. (Narrated By Ahmad).

Both pieces of information from the above Hadith, it is clear that Islam teaches that blessing marriage is a marriage with lightest dowry and simple wedding budget submission. What is the purpose and the content of the Hadith of the Prophet above?

Giving of Good Dowry in Islam 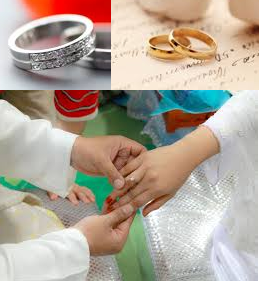 In the moslem marriage law that called munakahat has been set up for grant's dowry from the husband for his wife was mandatory in a marriage. Although in the religions cannot determine with certainty the value or amount of the dowry, but it's dowry was should not opposite or contrary to the principles of Islam in a marriage that makes it easier for the wedding as the basis in forming a household.

The definition of make an simplify in a marriage was meaning to shut the door the cohabitation that is a great sin, which is strictly forbidden in Islam. In addition, the marriage is also a method or way of Islam to prevent sexual disorder as various diseases community should be destroyed.

Islam gives the correction of any habit or custom of the Gentiles of the Arabs-the excess overboard in setting or 's dowry. High-value's dowry was often serve as a barrier for a wedding. So that this resulted in an aborted or not being a marriage due to the inability to groom in meeting the demands of dowry or the high value of 's dowry from the women party. So was clearly, the things like this has violated to the religious teachings as well as humanity.

The Prophet Prophet Muhammad. give a suggestion to give dowry was though only in the form of a ring of iron. The reason is, the dowry is not a symbol's of women value within a marriage, but it is only a symbol of the duty of a husband to his wife in giving a living.

Professor at the University of Cairo from Asl-Azhar named Dr. m. Sayyid Ahmad Al-Musayyar, give a statement that: we are calling on all leaders, in order to facilitate a marriage so that the honor of the youths will be maintained properly. With marriage, the youths will be free from the trap of the devil. The least expensive of dowry is the most blessed 's dowry for a woman.

The Greatest Marriage dowry
A wedding is a sacred event that should be gratefully welcomed and excited. Therefore, a marriage should be celebrated with a party or known by the term wedding party (walimatul Ursy).

A Hadith was narrated by Imam Ahmad: when Ali Ibn Abi Talib proposes one of the Prophet's daughter named Fathimah. The Prophet said: Marriages must be celebrated with walimah.

In the event of a wedding party or Walimah was have an ethical treatise. You need to know that, a walimah is not event to show off status, show off your pride, and the showy luxury. The Good Walimah or wedding party should be associated with condition of environment.

Based on the explanation of the Hadith from Prophet Muhammad. as an explanation of Ibn Hajar in Fath Al From al-Bari, explaining that: as bad as walimah or wedding party is just only invite the people rich, but the people are poor are not invited.

An Ironic that exist in society, there are rare cases of husband and wife involved in disputes, bickering that occurs in only some time after the event a party or walimah weddings festive paced and luxury.
Then, very exactly Islamic opinion of good marriage and blessing is a marriage that cannot be 'purchased' with expensive and versatile reception. A good wedding and blessing must be organized by the husband and wife are concerned. Related to this, religion has a role that cannot be ruled out in a household that want to be achieve of blessing. There will be no blessing and happiness, when religion was squandered and excluded in the household life.