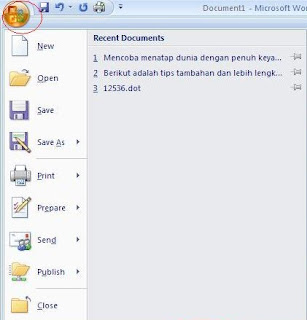 As seen in the picture of the main menu in Microsoft Office Word 2007. Main Menu button located on the far left corner of the window in Microsoft Word 2007 that contained the following buttons: New, Open, Save, Save As, Print, Prepare, Send, Publish, Close. Each of these buttons have different functions.

What is the function of each of the key?